Explaining veganism to people can be tricky. Generally, people seem to have got the hang of vegetarianism; it’s obvious that in order to make bacon, a pig has to die, there’s no getting around that fact. But when it comes to eggs, many are baffled; “surely it doesn’t hurt the chickens to take their eggs?” “as long as the chickens are treated well there’s no problem, right?”. Most egg-eating people I’ve spoken to say they only buy free-range eggs. I’m guessing my circle of friends must be poorly representative of the UK at large because recent figures from the UK egg industry state that only 50% of eggs consumed in the UK in 2016 were free-range (48% were from caged hens and 2% were from birds reared in barn systems) [1]. It could also be the case that many people who buy boxes of free-range whole eggs from the supermarket do not think to check the origins of eggs in things like store-bought cakes, or in dishes served to them in restaurants. 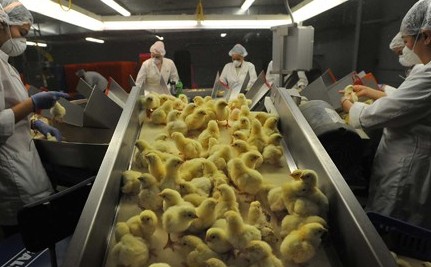 “Hang on”, I hear you cry, “weren’t battery cages banned in the EU in 2012?” The answer is yes, standard battery cages (also called non-enriched cages) are currently illegal in the EU [2]. However, so-called “enriched cages” are still allowed and are used widely (see figures for UK above). Although these cages provide a small amount of extra space compared to standard battery cages, and provide a perch and dust-bathing area, they have still been condemned as unacceptable in a joint statement released by several international animal welfare organisations, including the RSPCA and the Humane Society of the United States [3].