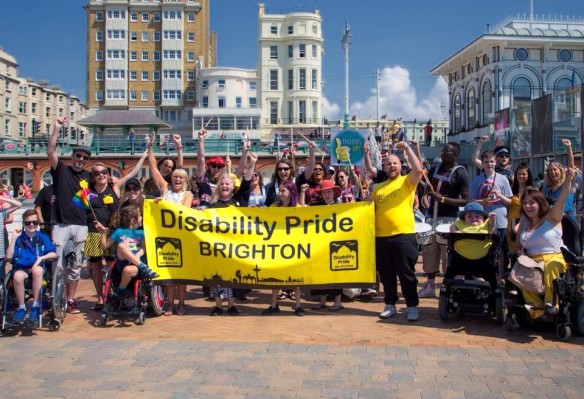 As you can see from this (rather amateur – sorry!) video, we are struggling to raise funds this year. We want everyone to come along and enjoy themselves and it would be wonderful to be able to make this third year really special. Last year was magical and many people said it was the best day of their lives. We would be very grateful if you could donate something so that we can ensure the festival is fully accessible for people with every disability.

Please share our Crowdfunder and, if you can donate something yourself, please click on the link below.

Most importantly, do come along and bring your friends, family, carers, professionals, allies and everyone else!

Many thanks.
Jenny, Charlie and the Disability Pride Brighton committee
(Oh, and… my dogs!)

The extent of force by which non-political commercial enterprise is prepared to go in their attempts to silence WikiLeaks should be all one needs to witness just how widespread and deep the political corruption goes.

By choosing this line of action our political leaders are openly creating connections that expose themselves and foolishly implicate their own guilt.
– Gary Walsh domesticempire.co.uk

From WikiLeaks:
“WikiLeaks is under attack by the big financial services companies, but there are still ways you can beat them.”

“As a result of exposing U.S. embassies from around the world, five major US financial institutions, VISA, MasterCard, PayPal, Western Union and the Bank of America, have tried to economically strangle WikiLeaks. The attack has blocked over 95% of our donations, costing tens of millions of dollars in lost revenue. The attack is entirely political. In fact, in the only formal review to occur, the US Treasury found that there were no lawful grounds to add WikiLeaks to financial blockade.

Your donations are vital to pay for our fight against this and other kinds of censorship, for Wikileaks’ projects, staff, servers and protective infrastructure. We are entirely supported by the general public.”

“We are forced to temporarily suspend publishing whilst we secure our economic survival. For almost a year we have been fighting an unlawful financial blockade. We cannot allow giant US finance companies to decide how the whole world votes with its pocket. Our battles are costly. We need your support to fight back. Please donate now.

The only thing we suppress is corruption. Are you OK with that?
WikiLeaks: Your future. Invest in it.“

Biased BBCExcellent site which since 2003 has been keeping a close eye on the inner workings of this public funded PR voice of the state.

Biased BBC Excellent site which since 2003 has been keeping a close eye on the inner workings of this public funded PR voice of the state.